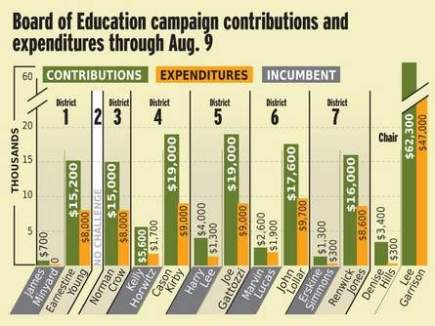 The graph Illustration by Anthony Bratina  was in the Tuscaloosa News accompanying an article about the extraordinary amount of cash being poured into the coffers of candidates for the Tuscaloosa School Board election. The article puts an emphasis on PAC contributions. But for Lee Garrison over half of his contributions come from PACs as well as businesses/ corporations, not from individuals. Garrison’s largest contribution from an individual came from Drummond shareholder Barbara Anderson who gave him $3,000.

Although the facts and figures show that this election is truly extraordinary, just why so much money has been invested in electing School Board members who have so much support from businesses and PACs isn’t clear. In the candidate forums there has been little criticism of the incumbents by the well-backed challengers. Nebulous, inaccurate or misleading attacks on the Board have been made, although accomplishments by the Board particularly in the last two years have been impressive.

The Chamber of Commerce’s CEO Jim Page as a guest columnist in The Tuscaloosa News wrote about the Chamber’s Adopt-A-School program, saying that his business advocacy organization had been interested in schools long before the current election. He doesn’t mention the Chamber’s recent interest in electing School Board members. “The Chamber will recruit seasoned business leaders to seek elected office on local boards of education, beginning in 2013, to significantly improve the policy-making, financial management and operations of local public school districts.”

The Tuscaloosa News article by Jamon Smith “School board races being backed by cash” reported on the School Board race:

By far, more money has been raised for candidates in the 2013 Tuscaloosa City Board of Education election than any other in the city school board’s history. And businesses, in the form of business-funded PACs and direct business contributions, have been responsible for most of the money flowing into the campaign coffers of the non-incumbents.

According to campaign finance reports filed by the candidates as of Aug. 9, more than $181,000 has been contributed to the campaigns of the 13 candidates in the 2013 race, which is more than the total funds raised in the three previous school board elections combined.

Individually, every non-incumbent — except for board chair candidate Denise Hills — has raised more money than all the incumbents combined.

About $96,800 has been contributed to the non-incumbents from PACs, comprising about 58 percent of their combined total contributions.

As of Aug. 9, Hills was the only non-incumbent who hadn’t received PAC money.

None of the incumbents have received money from PACs.

The five PACs that have contributed to the non-incumbents’ campaigns so far are the Educate Tuscaloosa PAC, NUCOR PAC, Pride PAC II, T-Town PAC II and the Alabama Builders PAC.

The Educate Tuscaloosa PAC, created in April and chaired by Echols, has by far been the largest contributor to the challengers’ campaigns.

As of Aug. 9, Garrison had received contributions from 27 businesses which have given him about $16,400.