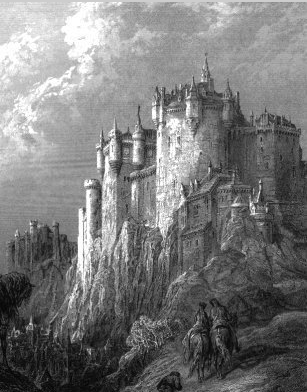 The lyrics to the musical Camelot proclaim:

“Each evening, from December to December,
Before you drift to sleep upon your cot,
Think back on all the tales that you remember
Of Camelot.
Ask ev’ry person if he’s heard the story,
And tell it strong and clear if he has not,
That once there was a fleeting wisp of glory
Called Camelot.
Camelot! Camelot!
Now say it out with pride and joy!

In an article in the Tuscaloosa News University of Alabama campus leader Elliot Spillers has looked back on his term as SGA President:

“Because I love this campus, I have to be very critical of it. And I know its potential, and I won’t be satisfied until we fully tap into that potential.”

Yes, things seem to have reverted back to rule by The Machine at the Capstone, but things weren’t as perfect as in the mythical Camelot even during Spillers’ reign.

During Spillers’ year in office, he faced obstacles, such as the SGA Senate’s refusal to confirm his chief of staff, but he also successfully launched campus initiatives and institutional changes addressing diversity and inclusivity. A testament to his legacy will be whether those developments continue to progress as new officials are elected to the SGA by a student body that grows more geographically diverse each year.

Spillers said he made an effort during his presidency to reach out to all students on campus, rather than only students in the Greek organizations that Machine candidates often catered to.

His goal of working toward a more inclusive campus comes as the student body at UA becomes more diverse: Out-of-state students make up 51 percent of the student body, and international students account for 3 percent, leaving only 46 percent of students enrolling from in-state.

Spillers was elected on a platform that emphasized wellness for the entire Alabama campus, focusing specifically on sexual assault awareness and mental health.

While Spillers said progress was made on these issues, he and his executive board have pledged to work with the seven newly elected SGA officers throughout the transition this spring in order to offer advice and guidance in hopes that those advances can be sustained.

He will be succeeded as SGA president by Lillian Roth, who has declined to comment on her association to the Machine when asked by the student newspaper, the Crimson White. Both openly non-Machine presidential candidates were defeated.

University of Alabama President Stuart Bell , who was appointed in the summer of 2015, may yet rein in The Machine, although it has once again taken over  University of Alabama student politics, but the days of Spiller’s leadership will now be enveloped in a mist of yore and become but a memory of a better time,  just as was in the case of Camelot.