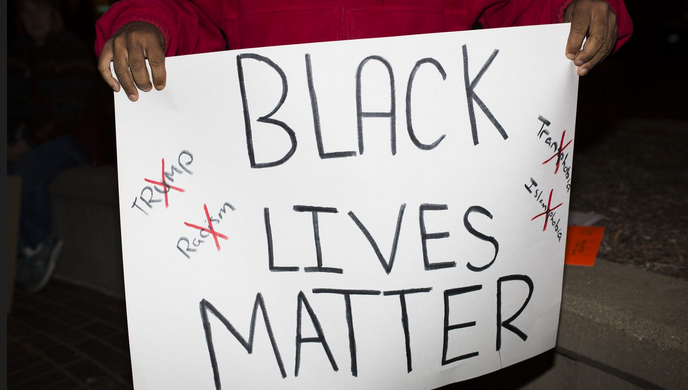 As I marched with my daughter from Bryant-Denny Stadium, down University Boulevard with about 50 other protestors toward Government Plaza people spewed hatred and slurs our way. I expected that.

What I didn’t expect was the depth of their hatred for people simply practicing their American rights. We were young and old, students and grandparents, babies and children. It was a vulnerable feeling, given that we were outnumbered by tens of thousands.

I love my country. But the people of America have let me down with their lack of tolerance, just as Alabama fans did as they poured out of the stadium, or stumbled drunk out of bars to degrade people of a different color, religion, or opinion, and anything else they didn’t understand. Just minutes before that we had sat alongside one another, united by our favorite team, their hatred cloaked in houndstooth and crimson.

Does this person hate me too?

Cummings somehow doesn’t get it. The Bama Football crowd is largely composed of Trump Republicans. Before Trump became the GOP’s front runner, Republican Ted Cruz was hosted at the stadium. University of Alabama students are mostly Republicans and Trump supporters. That’s just the way it is. Before the election there was a Trump for President tent right outside the stadium with a life size cardboard cutout of Donald Trump where fans were lining up to have selfies taken next to it.

Challenging Trump and, for that matter, whites in general at a protest after a football game will provoke a lot of hostility. Could the protestors have not been aware of this?

Too often idealistic students seem surprised that their freedom of speech is not respected. In this case, the outcome of a national election was to some extent being protested. If Hillary Clinton had won, how would the protestors react to Trump supporters staging a protest? Many would laugh at the disappointed Trump backers I suspect although perhaps they would’ve been less hostile.

It was opportunistic to say the least for the protestors to stage their action to coincide with a football game when there would be a huge crowd. The coaches and football players certainly seem to have no racial animosity even if some of their fans are prejudiced.

Some fans may just have resented the fact that there was a political protest at a game. But when there are over one hundred thousand fans, there are bound to be some of them who show less restraint when the candidate that they supported is attacked.

If I were one of the protestors however I wouldn’t be worried about everybody hating me. Most fans didn’t give the protest a second thought.

One thought on “No Surprise Here”