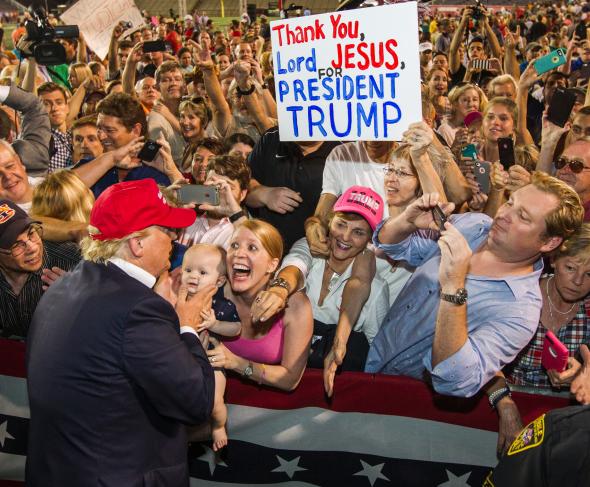 With the Don about to enter the Oval Office there will undoubtedly be a lot of “amazing” and “terrific” things going on in the land of the free.

Alabama should be thanked for its role in bringing Trump to the White House. After all Trump’s 2015 rally in Roll Tide Country really got the ball rolling for the Don.

Jordan LaPorta in Yellowhammer News wrote that Trump will make a triumphant return to to the Heart of Dixie:

In what one attendee referred to as ‘something between a Lynyrd Skynyrd concert and the Daytona 500,’ tens of thousands of Donald J. Trump supporters flocked to Ladd-Peebles Stadium in August of 2015 for the largest event of the Republican presidential primary. Fifteen months later, President-elect Trump is set to return to the exact same venue as part of his ‘USA Thank You Tour 2016.’

Jennifer Jacobs of Bloomberg Politics reported on MSNBC’s “’With All Day Respect’ that Trump’s tour, which kicks off Thursday evening in Ohio, will be going ‘to places that mean something to Donald Trump and to his campaign.’

One place they’re going to go is Mobile, Alabama, which is a place that is really special for Trump and his campaign. They attracted 30,000 people there last summer. It was a symbolic moment for them when they really realized they had a movement going on and could take this somewhere.”

The date for the event has not been confirmed, but it is expected to come in the next couple of weeks.

Trump’s last trip to Mobile was a stunning show of populist might at a time when prevailing wisdom was that he would be a political shooting star, shining brightly before quickly burning out.

At an early stage of the campaign, while most candidates were flying commercial and traversing the country on buses, the first sign of Trump’s presence in The Port City was the silhouette of ‘Trump Force One,’ the billionaire real estate mogul’s private Boeing 757.

Ever the showman, Mr. Trump directed the jet’s pilot to perform a flyover of the stadium before landing at the nearby airport. Every major media outlet in the country was there to capture the mayhem.

Trump was preceded on stage by a host of local and state elected officials who endorsed him before an anxious crowd. Then with anticipation reaching a fevered pitch, the man himself emerged, backed by ‘Sweet Home Alabama’ blaring over the PA system.

Who knows? Maybe Alabama will be thanked in another way?  The state could sure use some help. Alabama ranked number 46 of all of the  states in terms of having the best quality of life. Leada Gore reported that the typical household in Alabama earns only $44,765 a year, roughly $11,000 less than the national median income.

Come on, President Trump, Alabama needs more than a thank you rally. Maybe Alabama could benefit from any Federal projects designed to lock up and deport illegals or something?