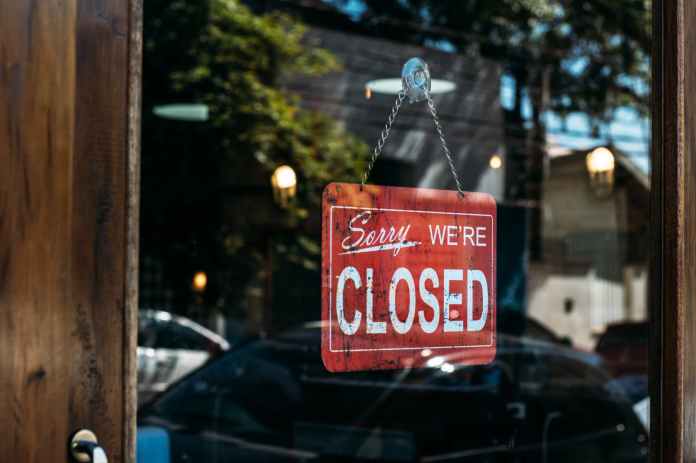 Photo by Kaique Rocha on Pexels.com

Because of the Coronavirus pandemic Tuscaloosa has been under stay-at-home orders for nearly a month. A limited city-wide curfew was announced on March 25th. Many businesses are either closed or operating in a limited way.

Mayor Walt Maddox announced that he would present a plan on April 28th about the next steps that the city would take.  “I will be presenting my plan to Restart Tuscaloosa which will be the fuel to address job losses, neighborhoods, response agencies, and (the city’s) financial future.”

Concerns about the overtaxing of medical facilities have driven the city’s response to the pandemic. Data from CovidActNow.org. was used to base projections on how the city’s hospitals would have been affected by the spread of the virus. The city’s orders have been coordinated with the state of Alabama’s policies. Alabama’s Governor Kay Ivey said that the state’s stay-at-home orders would not be lifted before the current April 30 deadline.

In addition to businesses that are considered “essential” certain outdoor areas, such as the Riverwalk can be used by people who practice social distancing. Humorous signage was created by the city to remind people about the six foot distancing requirement. 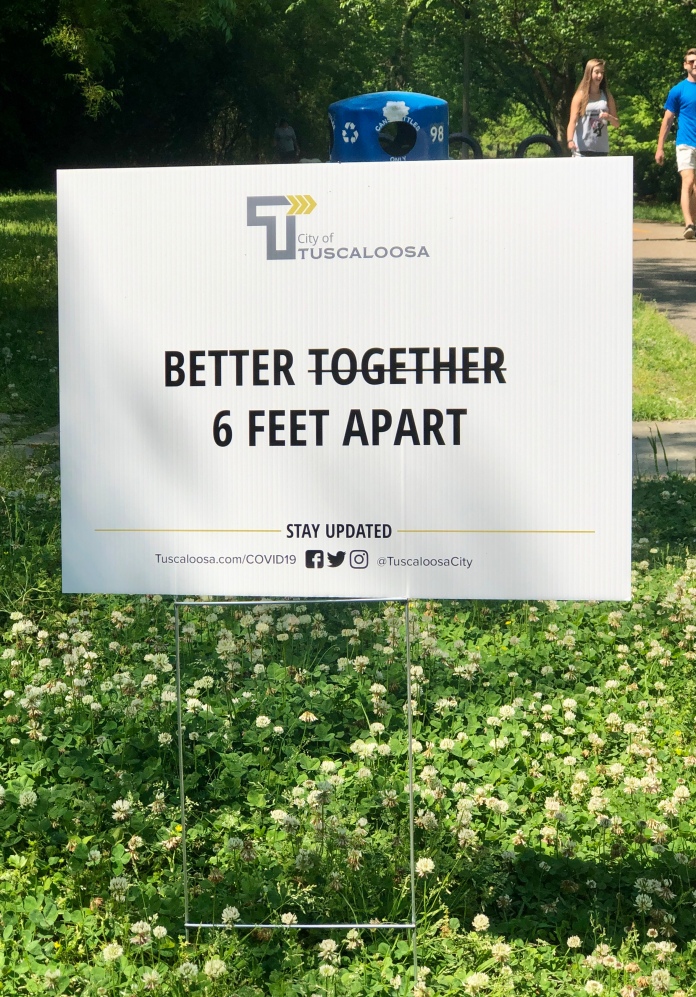 The city has used social media to keep people informed. It’s website Tuscaloosa.com/COVID19 provides continual updates on the city’s response to the pandemic.

Mayor Maddox, like other city, state and national leaders, is in a difficult position. Peter Baker in the New York Times wrote: “With no vaccine or cure, the president, governors, mayors and county executives will have to decide how many deaths would be acceptable to restore a shattered economy.”

Tuscaloosa is a college town. With classes at the University of Alabama cancelled and the consequent departure of over 20,000 students the city has experienced an enormous negative economic impact. An article by Stephen M. Gavazzi in Forbes described the situation that exists in many college towns:

Until recently, college towns were thought to have a distinct economic advantage over municipalities that did not host an institution of higher learning. Colleges and universities were touted as “anchor institutions,” a term indicating their long-term investment in the communities they served. With the COVID-19 pandemic, however, these same towns now face very real economic peril.

Chief among the unique aspects of the college town is the back and forth movement of students and how those population swings impact the local economy. When students arrive on campus in the fall, businesses thrive. Apartments are rented, back to school supplies are purchased, etc. Once students settle in, they frequent coffee shops, restaurants, bars, and various entertainment venues surrounding campus. Home football games and other large social events hosted by universities add to the mix. Food and beverages are bought in copious quantities by participants in the revelry. Hotel rooms fill, collegiate merchandise is snapped up, and gas tanks are filled, among other purchases made by these weekend visitors.

When the academic year is over in the spring, students graduate or go back to their hometowns for the summer. Sports seasons are completed, and other campus events wind down. Hence, the college town population contracts for several months, and the economy slows to a trickle of its former self. In a normal year, this downturn is relatively brief, and it can be anticipated by local businesses. Now, however, the COVID-19 pandemic has brought the local economy to an almost immediate and complete standstill, and many months earlier than had been anticipated.

Georgia’s governor Brian Kemp has received a great deal of criticism for his decision to reopen gyms, hair salons, bowling alleys, tattoo and massage parlors and then, a only week afterwards,  movie theaters and restaurants. An article in Reuters (“With reopenings in U.S. South, some merchants lay out welcome mat, others fearful”) by Ann Saphir and Lindsay Dunsmuir reported on the reluctance of many businesses to reopen.

Mayor Maddox has repeatedly addressed the city council during virtual work sessions on the problems that would be associated with the premature reopening of businesses. As an example he said that a restaurant, if given the green light to reopen, would have to retrain its employees and stock perishable food. If the restaurant were to be ordered to close shortly afterwards it would then have seen a financial loss greater than it had experienced by remaining closed.

President Donald Trump has a fondness for the University of Alabama and has mentioned its football program when addressing the nation about the epidemic. Trump is quoted in the Los Angeles Times by David Lauter about his idea of what getting back to “normal” would be:

Lauter wrote, “Trump’s stressing of a return to full normality was telling — so was his use of Alabama college football as his touchstone.” He pointed out that the director of the White House’s coronavirus task force Dr. Deborah Birx was not as optimistic as Trump about returning to “normal.”  “Birx and her medical colleagues have made it clear that they don’t expect the country to return to true normal until a vaccine against the coronavirus — or an effective therapy — becomes widely available. That could still be a year to 18 months away.”

Returning to “normal” in T-Town may not occur for some time. The continued closure of the University of Alabama and, what to many people would be unimaginable, not having a packed stadium and tailgating for Crimson Tide football games in the Fall may be inevitable.