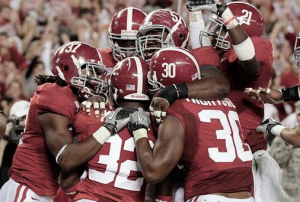 At the SEC Championship game among the fans in the stadium who were wearing suits and ties were members of the University of Alabama Greek organizations. They cheered boisterously when Alabama’s quarterback Blake Sims walked victoriously on the grid iron after the Crimson Tide won the SEC title game. Alongside Sims walked his beautiful five year-old daughter Kyla. She was even interviewed on CBS-TV.

Sims said, “When you have a precious little daughter like I do, I’m very blessed to have her. I didn’t want to spend that moment without her and I’m just glad that her mother gave her the opportunity to come to the game and I’m glad she’s here to experience this with me.”

Kyla might even want to join a sorority at the University someday. Who knows? By the time she’s old enough to attend the University there might be an opportunity for her to pledge in one of the traditionally segregated “white” sororities. Of course there are also sororities that have always been predominantly black.

A reader of this blog commented on the letter to Judy Bonner that concerned her daughter’s experience with the Greek system at the University: “I think that it is a good thing that this family sent their daughter to the University of Alabama. Perhaps there she learned the most important lesson, that life is not fair. While we all are created equal, all are not born equally advantaged. People do have a right to chose their friends and reject others. Americans have a constitutional right of freedom of assocaition [sic] and the right to exclude, in private clubs (fraternities and soroities ) [sic] those with whom they do not wish to associate. Do feelings get hurt? Yes, get over it. Move on. Change your attitude. Change your life.”

The individual who made such a comment seems to assume that exclusion of people from “private clubs” is a “constitutional right.” The state of Alabama charges $100 yearly to rent the property that fraternal organizations use. The fair market price for such property has been estimated to be as much as several hundred thousand dollars annually. Loans for the construction of fraternities and sororities have been provided by the University as well. Perhaps if the fraternal organizations at a public university were located on privately owned property and did not benefit from the financial incentives provided by the University they might be more legitimately considered as “private clubs.” No formal affiliation with the University should be allowed in that case. Even then, racial discrimination might not be “constitutional.”

The members of Greek organizations who, while cheering black athletes, would not want them in their “private clubs” are part of an intractable problem where the privileged rule that exists at the University. The Student Government Association is dominated by the Greeks. Even those who are elected in a municipal district of the city of Tuscaloosa are decided by the Greeks. Nearly thirty percent of the University’s students are Greeks. The administration at the University of Alabama appears to have been reluctant in providing much ethical guidance to those in the Greek system.

Student athletes participate in sports because of scholarships, the desire to compete and the prospect, for a few, of a lucrative professional sports career. Perhaps most of them could care less about the discriminatory policies of the Greek organizations that are enabled by the University’s administration. A star football player might not even care if his daughter might be excluded someday from their ranks. Maybe he understands that “life is not fair”?

One thought on “Clueless Greeks & The Crimson Tide”